Spring Pruning in the Garden

Hack the Winter Blues Away 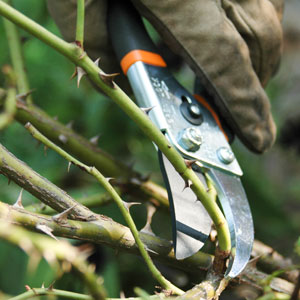 If you love to prune, cut and saw your way through the garden, spring is a joyous time. As winter fades, keep shrubs healthy and maximize flowering by hacking the following shrubs down to a simple framework. For example, your Buddleja (butterfly bush) may be a feature plant situated at the back of the garden bed. In this case, cut the plant back to a height that will allow it to grow taller than the surrounding material. It will look like a naked stick when you’re done, but fear not! You will be rewarded with a flower-filled shrub when the warmth of spring speeds up the garden, adding about five to six feet of growth to the butterfly bush.

Shrubs you can prune worry-free

The following shrubs can be cut back in spring to encourage lots of summer growth. Do your pruning before the buds on the plant push out, i.e. while the plant is still dormant. For these plants it is best to remove old branches (the thickest ones) by pruning them out of the plant at the base. You will encourage young new canes to grow in their place.

Hard prune the list of shrubs below for amazing results. Hard pruning involves cutting back the plant to a fairly small framework as they are vigorous growers that can easily fill out in one season of growth.

Give the garden a quick spruce-up by removing dead branches from shrubs and cutting back ornamental grasses and perennials that were left over winter. The garden will have an instant tidy look.  Perennials can be cut back right to the ground, removing any dead stems of foliage left over from last year’s growth. The simple act of removing dead, diseased or damaged branches from shrubs and small trees can go a long way to improving the overall look and health of the plants. I’m always surprised by this straightforward task and the visual impact it can have. Often just removing the 3 “D’s” (dead, diseased, damaged) is all that is needed to prune a shrub.

Spring flowering plants should be left to flower before being pruned. Once they’ve bloomed and flowers are spent is the best time to prune these shrubs and trees. Cutting immediately after flowering allows plants time to set their buds for the following year during the growing season.

Ornamental grasses generally prefer to be cut back in spring. The only grasses to leave alone are Carex, or evergreen sedges. When cutting back grasses, cut them using secateurs into a neat dome shape. Leave three inches of the existing stems above the base of the plant to avoid cutting into the crown of the plant. New growth will sprout from here and fill in rapidly.

All of your garden cuttings can be disposed of in your city’s green waste bin, to be hauled away and turned into compost. If you would like to add some woody material to your own compost bin, consider renting a shredder from your local equipment rental shop. A shredder makes quick work of breaking down all your branches and stems and adds a vital layer to the compost pile so it’s not just leaves, grass clippings and herbaceous material.